*Come to one or both

Thomas Morehouse is a college student working for the summer, against his wishes, as a part-time census-taker. When his car breaks down and his cell phone coverage fades in a remote part of the state, he distractedly starts walking. After wandering several miles, he stumbles upon the Bennett property.Bogey Bennett runs a secret moonshine operation that supplies over half the surrounding area with corn liquor. He is a widower who is raising four daughters.Bogey feels threatened by Thomas, thinking he has been sent to find his still, but in the process discovers an opportunity to marry off one of his daughters to this well-to-do young man. Trouble is, Thomas has eyes for Bogey’s feisty niece, but the feeling may not be mutual.Bogey tries to keep Thomas away not only from his operation, but from his niece, too. Throw in an escaped convict, some wacky neighbors, a nosy sheriff, and lots of misunderstanding for a true sense of backwoods fun.

PANSY BENNETT: Oldest daughter. Tomboy, “field and stream” type. Eager to please her father by acting like she’s a chip off the ole’ block.

DAISY BENNETT: Youngest daughter who is mute from a childhood trauma. She carries a teddy bear wherever she goes and tends to follow her sisters.

MARY BENNETT: Bogey’s niece who came to live with the family after her parents’ deaths. Intelligent, somewhat a dreamer, but can be very independent and feisty.

THOMAS MOOREHOUSE: College-age. Somewhat spoiled, and narrow in his views. But can be caring and sensitive if need be.

PEACHY ANNE: Middle-aged widow raising a small army of children. Chatty, strong, independent-type woman who finds it hard not to be a mother to all.

SHERIFF ED BROWN: Middle-aged man who knows more about what’s going on than he puts on. Laid-back, but is a straight shooter with others.

SHORTY: Diminutive fellow with a tendency to put his foot in his mouth.

VIRGIL: Another of Bogey’s friends

We are also in need of set builders and designers, artists/painters, and sound engineers to help us produce this play.

Send us a PM on Facebook Messenger or email us at info@tracksidetheater.org.

This site uses Akismet to reduce spam. Learn how your comment data is processed.

With the button above, you can shop for all your favorite things through Amazon.com and support Trackside Theater at the same time. With this link, Amazon will donate 0.5% of the price of eligible smile.amazon.com purchases to Trackside Theater.

If you bookmark the page after you sign in and use everytime you shop at Amazon, we'll receive a little something everytime you do.

Thank you for supporting family-friendly community theater in Luray and the Shenandoah Valley!


Have a question? Send us an email. 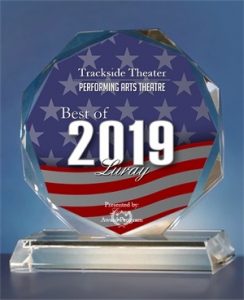 Trackside Theater is a 501c3 nonprofit and depends on donors like you to keep family-friendly live theater going in the Shenandoah Valley. Please consider donating by clicking the button above.

We thank you from the bottom of our heart!

to our newsletter to stay up-to-date on performances, auditions, and special events.